It sucks to be oxygen starved. Until recently, I took the meaty oxygenated air of sea level for granted. At home, atmospheric oxygen is the ubiquitous, ethereal life giving substance that enters the body with each respiration, as reliable as the tides. Oxygen is a substance best recognized by its absence and a low oxygen environment is a mini prequel to death, a disagreeable place filled with a host of physical symptoms that tax survival. The best place on earth to go should one wish to experience the effects of oxygen starvation is the high Himalaya. 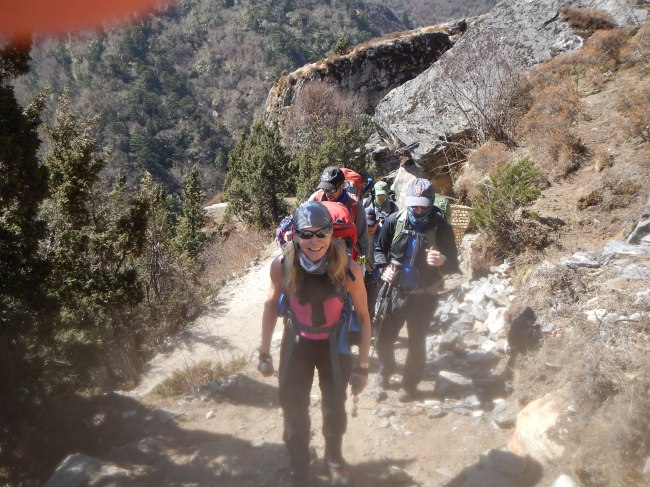 At sea level billions of oxygen molecules jostle with nitrogen, carbon dioxide, water vapor, argon and other gases to form a dense atmospheric mantle. The part we breathe in is referred to as air. Conveniently, this dense, moist blanket of air is kept in place by Earth’s gravity and at sea level red blood cells can grab all of the oxygen molecules necessary to saturate the blood and sustain life. As altitude increases, the wet blanket dries out, becomes lighter and because gravity is correspondingly diminished, the atmospheric density decreases. Thick air becomes thin air and oxygen concentration plummets exponentially. In the atmospheric slurry of colliding molecules and atoms at sea level, oxygen constitutes 20,9% of the total gases. At 16,000 ft./ 4876 m. oxygen availability is halved and at the top of Mt Everest (or the height our jet flew to get to from home Vancouver, BC) only one third of the oxygen available at sea level remains. I hadn’t given much thought about the science of air until I experienced the science and its effects first hand. 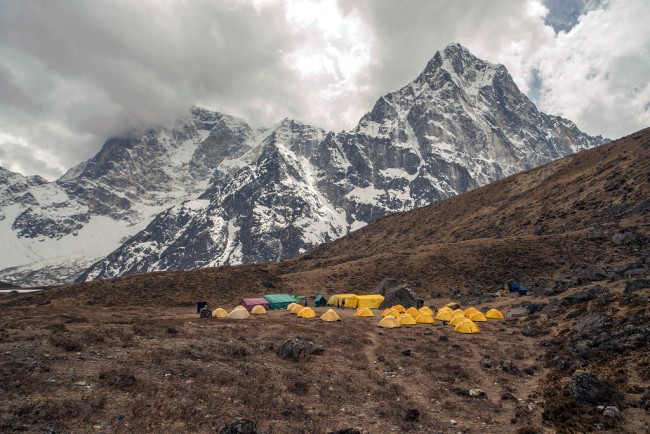 This spring my husband and I went to Nepal to climb Lobuche, a mini mountain by Himalayan standards, but still higher than any peak in North America. It is nestled on the western flank of the Himalayan massif that includes Everest and is reached by trudging from Lukla into the Khumbu valley. To get to Everest one must fly from home (1, 250 ft./ 380m) to Kathmandu (4,600 ft. /4,600 m) to Lukla (9,380ft /2,860m) before walking uphill to Everest basecamp at 17,659-ft./5.364 m. 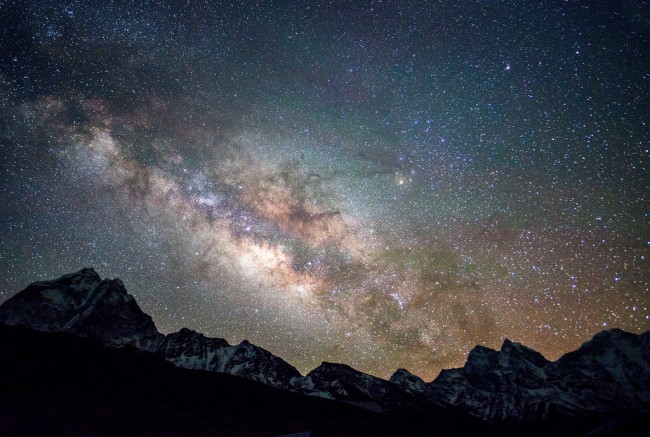 The epic nature, the mountainous beauty and the fantastic people one meets on such a trip cannot be overstated but the residual memories I have of high Nepal are ones of feeling God awful. In Lukla, before the trip has barely started, hypoxia hits you like a brick. Physical symptoms of low oxygen concentration are acute at any elevation above 8,000 ft./2,400 m. and it was not uncommon to find freshly arrived Westerners experiencing headaches and searching for ibuprofen. 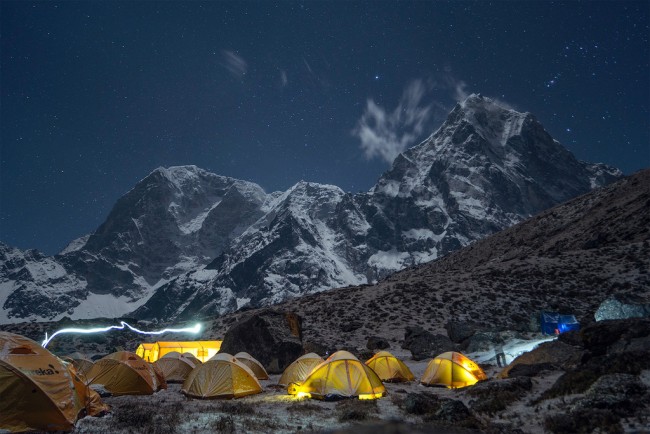 Acclimation takes time. Part of the ability to adapt to altitude is genetic but Diamox, a drug many Westerners take to get out of Lukla, can remedy the acute symptoms. I felt fantastic as I left Lukla for the Khumbu, so I chose to ignore the twice-normal pulse, as the heart became a hammer and the lungs a bellows, extracting all the available oxygen they could. At dinner I attempted to take in enough to keep up with caloric expenditure, and there I sat. The gut had decided to call it a day. There was no way my stomach was willing to accept even a portion of what was before me. With all of the blood supply diverted to the muscles, heart and lungs the digestive system went on strike. Over weeks this did improve but the weight and muscle I accumulated through training melted away. If eating were out of the question, surely sleep would be welcome and come easily. No such luck. Going to bed was an exercise in frustration. Night was the time to wake up with a headache and gulp for air before resting and repeating the process of tossing, coughing, gasping and waiting until it was time to wake again. Anorexia, headache, cough, gut disturbance, lethargy, air hunger, weight loss, cold intolerance and insomnia are common at altitude and are euphemistically diagnosed as acute mountain sickness or AMS. Although AMS will not kill you, it is an unpleasant part of high altitude travel and when left untreated can morph into the more serious and potentially fatal HACE (High Altitude Cerebral Edema where your brain becomes water logged) or HAPE (High Altitude Pulmonary Edema where the lungs fill with fluid).

Over weeks the severity of AMS dissipates as the body compensates through physiological adaption to the low oxygen environment, but this process takes time. For this reason, climbers spend months at Everest waiting for the body to acclimatize. The key to acclimation is to ascend slowly or better yet, descend and recover. Many climbers use supplemental oxygen, as there is no adaptation to altitude above 26,000 ft., an area known as the death zone. After a month at altitude my symptoms diminished (save for the eating and sleeping issues) but it is fair to say that the body and brain knew that this was not a place they wanted to be. 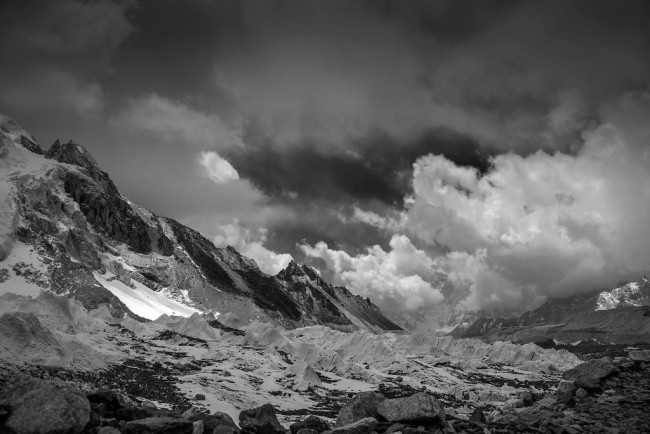 Three weeks after arriving in Nepal I stood on the top of Lobuche. It took everything I had to get there. My husband who has experienced the pain cave of competitive athletics remarked that the physical effort of the Hawaii Ironman paled in comparison to the exertion of this small Himalayan peak. It was on that day at that moment that I realized there would be no Mt Everest in my future. I like oxygen in my air and besides, I just couldn’t suffer for that long. 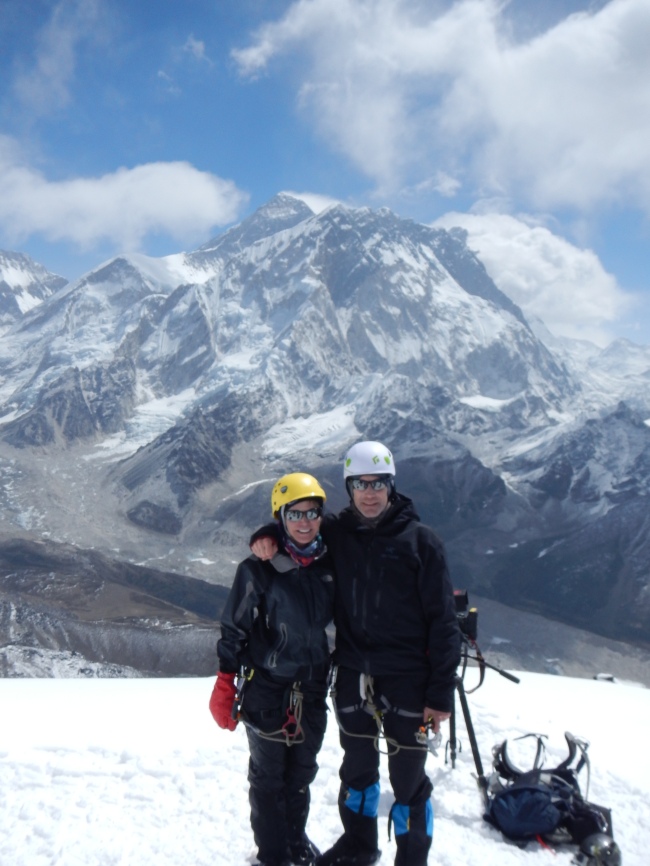