Take the only tree that’s left

And stuff it up the hole

Give me back the Berlin Wall

give me Stalin and St. Paul

it is murder.   Leonard Cohen, Recent Songs- The Future

Travel in India is akin to shock therapy. From the moment you step off the plane, the sheer crush of humanity, the chaos and the obvious environmental degradation grab you in a choke hold and force you to witness the collision between an exploding population and limited resources. India, without question, is a beautiful country with many charms, but with 1.2 billion people, a continental divide between rich and poor and many whose sole goal is survival, the lofty ideal of environmental preservation is low on the food chain. 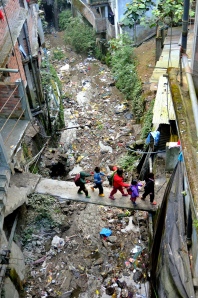 My trip to the Taj Mahal was one of a series of shocks.  Such a visit is nothing short of a full frontal assault on the 5 senses. The air alone can be seen, smelled, tasted, and almost touched. A 200 km/120 mi trip from Delhi to Agra was a marathon 6-hour bus ride through countryside barely visible though the smog of car exhaust, dust, wood burners, brick foundries, and industrial fumes. Everyone on the bus coughed constantly. Food breaks were impossible as parking was nonexistent in the endless flow of cars, trucks, buses, motorcycles, bicycles, rickshaws and humanity. Upon arrival the bus parked 500 meters away from the Taj Mahal. No one is allowed to drive to the site because the Taj Mahal is melting. Pollution has carved and pitted the ancient marble and her structure is dissolving under the influence. As a solution, all visitors are put in an electric car to make the last part of the journey. The irony of our ride in the pollution free car seemed to be lost on the organizers as we coughed and  squinted to see this magnificent structure through a shroud of smog . The return trip was more of the same; back to Delhi under a lurid red sky, a city of 22 million, itself a vision of the apocalypse.

It is easy to be smug living in Canada. Many may even question, Why do we need to care about other countries? Canadians enjoy a low population density, clean air and water, abundant resources and one of the highest standards of living anywhere on the planet. Some of us dutifully recycle our waste, turn off unneeded lights and try not to idle cars unnecessarily. Unfortunately, many of us consider this to be the end of our responsibility for addressing global environmental problems. While Canadians like to brag about their National Parks and wild open spaces, we seem increasingly willing to turn a blind eye to resource development, no matter how polluting it is, as long as jobs are being created. As long as the economy keeps chugging along, everyone sighs and shrugs their collective shoulders as another pristine area is poisoned, because, after all, it is usually occurring somewhere we don’t see. We are good consumers and jobs and economic growth always come first. The same can be said for India, but with a population thirty times larger than ours, the result of such decisions and their impact on the environment are proportionally magnified. What we need to realize is that Canada and India (and many other areas of the planet) are no more separate than conjoined twins sharing vital organs. When disease affects one it will be the demise of the other.

Davis Suzuki recently stated that the environmental movement has failed and I, reluctantly, have to agree. I am not a doomsayer, I am simply a traveller and my journeys have shown me that environmentalism unravels under population pressure.People require basic necessities and as population density increases and resources are scarce the environment is relegated to a luxury, a footnote, with stewardship in the back seat. Ffty years after its birth, environmentalism has fizzled out. In the 70’s, I recall the formation of the first Canadian Federal Environment Ministry to advocate for land protection. IIn the 80’s, clear cut logging was considered a sin, Green Peace was a hero and the Athabasca tar sands would never be developed because of the environmental destruction it would bring. In the 90’s, life got so damn good, everyone forgot about it all. We got wealthier and bought Hummers and so much more. In the 21st century a recession scared everyone and the economy and GDP growth became the only topic worth mentioning. The scare over the end of oil changed to oil everywhere – we just have to get it –  from the ocean, the rock, the sand and who cares where, as long as we get it. The mantra changed from sustainability to growth and jobs. Governments became more conservative and less visionary (No party will be elected that does not make the economy its first priority), Canadian academic research that was not pro expansion was suppressed or unfunded, and environmentalists became misguided exhibitionists or terrorists, while corporations promoted throw-away consumerism, all with overnment’s blessing.

There is now a collective indifference to greenhouse gas emissions, water quality, air pollution, you name it – because we are the only species on the block and, after all, what can we do? We titter about monster storms and then read our email, log on to Facebook or have a latte. Some ignore the fact we are changing the planet, or worse, deny it altogether. 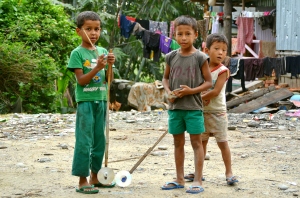 Along with most, I am asleep at the wheel and that is why, for me, India was such a smack in the face. It forced me to see what I choose to ignore, to wake up and see the world today, to understand what the collective choices of my generation have led to and to question what we have left for our children’s future. Nothing short of a global environmental revolution will change the direction we are headed and neither the visionaries nor the warriors are in sight. Without them Leonard Cohen will move from a poet to a prophet with his words, “I’ve seen the future brother, it is murder”.