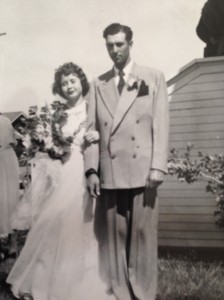 In the prairie where dinosaurs have laid their bones, so too are the bones of my childhood. And yet, I admit, I have more knowledge about the past of the dinosaur than I do about my own. So much of my memory of childhood is missing. Sixty years ago my father died in the grasslands, and I have left him there without a voice, absent from my life. But now I am restless. These last few years the whispers of both the ghosts of his past life and my long dead childhood have beckoned me to return to this place and resurrect them, to bear witness to their stories, and let them finally rest. The stories await my arrival, stored in the mind and the heart of my Aunt Rosemary, my father’s only living sibling. Rosemary is the one I need to visit because she is the portal to the past, the keeper of our collective history and our secrets, the ones I long to hear.

My father died at 26, before his life had started. His death was sudden and tragic, an event that brought devastation. I was 2 years old when my mother barely 24, was a widow and my father was buried. As I grew up my mother and my extended family never discussed my father. For them years later, his passing remained a wound so fresh and raw they were consumed, undone by the whisper of his name. So I learned to never ask. It is only in my seventh decade that I realize the silence has been costly because within it, I have lost a part of myself.

I am half my father, but he is a stranger to me. Who was this man? My aunt knows the answers I seek and during a recent visit she spends 2 days reliving the life she shared with my father. His younger sibling by 4 years, my aunt is the person who knew him the best and she is animated reliving their one-room school adventures. Horses were a big part of their life and on weekends they rode 11 miles in blizzards and sunshine to the Artland train station where the rest of the planet started and their known world came to an end. She sparkles as she shares the tricks they played on others and on themselves and describes my father as very funny, a clever comic. She is solemn when she talks about his health, how his frequent sickness in childhood preceded his fading as a man. Rosemary brags that my dad was tall, handsome, an eligible youth but when he married he blossomed in his role as husband and father. She recounts her brother’s nightly trips with me in tow, across the farm yard to his parents and his brother’s family, so proud was he to have a daughter. 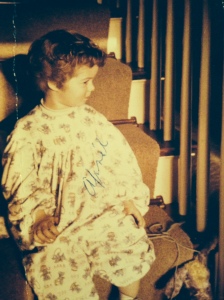 Slowly, over 2 days, one story connects to the next and a skeleton forms of my father’s life. The stories allow me a glimpse of my father but it is the rawness and depth of his sister’s emotion in the telling; hushed grief, tears, happiness, exuberant joy, laughter and love that put flesh on the bone of a man previously invisible to me. Through her my father is given a voice and he appears to me animated, alive, a ghost no longer but a man that I would have loved to know. In sharing her memories Rosemary gives me the greatest gift one person can give to another. In the autumn of my life and the winter of hers she gives me back my father. To know that I was well loved, wanted and welcome gives me a certain peace and in turn, the opportunity to reclaim a missing part of my childhood and a chance to put both of our ghosts to rest.